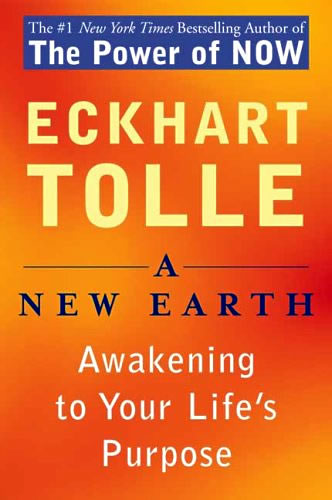 Eckhart Tolle’s A New Earth: Awakening to Your Life’s Purpose has sold several million copies. I suspect it is the biggest single influence on the “spiritual but not religious” trend that is bringing monism to the mainstream.

It deserves its success. It is brilliant: simple, clear, elegant, friendly; and mostly—I find—wise. Unfortunately, woven all through it, there is a terrible error.

A superficial mash-up? No.

Not everyone is as impressed with the book as I am. The usual criticism is that it is a superficial mash-up of spiritual platitudes from many familiar sources. This, I think, is quite wrong—although an understandable mistake.

A New Earth is not superficial at all. Tolle explains core principles and functions from two major spiritual systems. He has thought these through and understood them exceptionally thoroughly. The book is dense: every page has at least one significant idea. There is none of the usual self-help filler.

Tolle’s explanations are simple. I think that it is a good thing, although perhaps it gives the impression that his ideas are light-weight. He goes straight to the heart of the matter, without getting lost in complex concepts. He explicitly does not teach a system, with all the dogmatic beliefs, jargon, history, and rituals that go with those. People are used to the idea that difficult intellectual theories are the mark of profundity; I think that is quite wrong.

It is also not true that A New Earth is a mash-up of many religious traditions. This mistake can be forgiven, because Tolle goes out of his way to make it seem as though it is. For example, he quotes the New Testament once every couple of pages.

That is, I think, a deliberate misdirection. I can find no meaningful influence of Christianity in the book. Tolle probably put the Bible stuff in to reassure culturally-Christian readers that he’s not a Satanist or foreigner or something.1

I see only two significant sources for Tolle’s ideas. One is Buddhism, which is dominant, and which Tolle often explains magnificently.2

The other is monist eternalism, which he probably got from German Idealist philosophy (although Advaita Hinduism might also be a source).3 Monist eternalism is maybe a quarter of the book. It is what I called the “terrible error woven all through.”

Monist eternalism seems like it ought to be hard to sell. One of its core claims is:

You think you are Tyler Smith, 27 years old, gay, a web designer, living with your boyfriend in a one-bedroom apartment in Seattle. But you are wrong. Really, you are the entire universe. Also, you are God.

The obvious reply to that is:

No, that’s totally stupid. I am Tyler Smith. I’m quite sure; it says so on my birth certificate. And the whole universe wouldn’t fit in our apartment. When we moved in, the place didn’t even have enough room for our combined stuff. And, if I were God, I would know about it. God is supposed to know everything, right?

You sell monist eternalism by pointing out its alluring benefits:

Since you are God, you are immortal, all-powerful, and can stop worrying about the work project that’s behind schedule and whether your boyfriend is thinking of leaving or what.

The trick is to get that hook in while somehow neutralizing the “yeah, but I’m not God” reaction.

There are two traditional approaches to that. One is to invent a complicated explanation that supposedly proves that everyone is God, despite all evidence to the contrary. This line was perfected by Idealist philosophers two hundred years ago. It is still used by Ken Wilber, for instance; and similar intellectual obfuscation is used in New Age monism. It doesn’t work on most people, though. Your victim has to consider themselves smart enough that they believe they can follow the complicated explanation, but not actually be smart enough to figure out that it’s nonsense.

The other traditional approach is to say:

I am extremely holy and wise, as you can see because I wear a white robe and talk in a special, holy way. In fact, I am God; so you have to believe what I say. And I say: you are God too.

This is a common Hindu approach. It works only on the gullible and desperate. Most people will reply

I can put on a bathrobe and talk funny, too, but that doesn’t make me God. Or you, either.

Between these two approaches combined, only maybe ten percent of Westerners are vulnerable.

This is the “Big Lie” approach:

If you repeat an obvious falsehood often enough, with complete conviction and no attempt at defense, people will eventually come to believe it.

Tolle never gives any reason to believe the obviously wrong things he says, nor ever attempts to counter the natural objections.4 He just states absurdities as if they were plainly true; as though you will surely accept them if you try them on for a moment or two.

What held back earlier monist manifestations, such as the New Age, was the specifics of the systems. Monism was available only as the background world-view of complex belief systems. The specifics of these systems generally included beliefs and practices most people consider stupid.

What is arising now is not a new belief system, a new religion, spiritual ideology, or mythology. We are coming to the end not only of mythologies but also of ideologies and belief systems. (A New Earth, p. 21)

Apparently, this works. My impression (based on severely sketchy evidence, so take this lightly) is that the fraction of Americans who buy into monist eternalism has gone from a tenth to a quarter in the five years since A New Earth was published.5 Tolle can’t be the only reason, but I suspect he is the biggest single one.

It is easy to make fun of the New Age, which until recently was the main reservoir of monism. That’s shooting fish in a barrel.

A serious critique of A New Earth would be much more difficult; but also much more useful. Tolle presents monism clearly, simply, and elegantly. That demands a clear, simple, elegant rebuttal. A successful reply would not only clarify the issues for those it persuades to reject monism; it also would help committed monists understand what they’ve signed up for.

It’s difficult to respond to Tolle, because you can’t attack his arguments or evidence.

He doesn’t make any arguments; he simply states his beliefs as unquestionable, eternal Truths.

It doesn’t help to point out that what he says is factually false. Its falsity is obvious, but factual untruth doesn’t bother monists. For monism, specifics (and the material world) are unimportant. What matters is the abstract, the general, and the realm of Spirit.

Mostly, Tolle doesn’t mention specifics at all. Occasionally, he throws in some “science fact” for color. All of these are mind-bogglingly bogus.

What we perceive as physical matter is energy vibrating at a particular range of frequencies. Thoughts consist of the same energy vibrating at a higher frequency than matter, which is why they cannot be seen or touched. Thoughts have their own range of frequencies, with negative thoughts at the lower end of the scale and positive thoughts at the higher. (pp. 146-7)

A monist might defend Tolle by saying: “How do you know what he says about vibrating thoughts isn’t true? Isn’t that just your perspective?” Of course there is a good answer to this, but it is not one that will persuade monists.

A page-by-page explanation of what is right and wrong in A New Earth might be helpful. However, we need the positive alternative first.