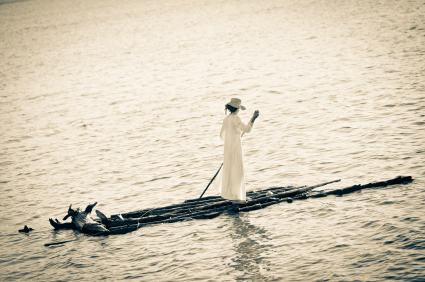 There are two fundamental ways to try to reject nebulosity: by fixating or denying meaningness.

Fixation is the strategy of insisting that meanings are clear, definite, permanent, discrete, and objectively certain.

Meaningness is like open ocean: vast, unpredictable, always in motion.1 When meaningness appears murky, chaotic, and disputable, fixation is a natural response.

In fixation, you cling to relatively solid fragments of meaningness and try to lash them together into a raft. Standing shakily on a bundle of splinters, you visualize grass beneath your feet, and try not to feel the rocking of the sea. “Here we are on dry land,” you proclaim. “Here we will build a fortress to keep us safe from the chaos of uncertainty.”

You might as well try to build your castle on a cloud. Since meaningness is inherently nebulous, it cannot work. Whenever an unusually big wave comes along, it tips you off your raft and back in the sea. Later in this book, in the eternalism chapter, we’ll look in detail at common ways you may respond to these inevitable failures. Among these are sentimentality and self-righteous aggression.

Another common reaction: when your own attempts at fixation fail, you may invoke an eternal ordering principle, such as God. These are invented as omnipotent, external forces that fixate meaningness. “God works in mysterious ways. This senseless horror is all part of the Cosmic Plan, even though we cannot understand why.”

Denial is the strategy of refusing to admit that meaningness exists, or insisting that it is unimportant, for example because it is purely subjective.

When it is obvious that certainty is impossible, that meanings can never be established objectively, that ultimately there is nothing to stand on, denial is a natural response. Meaningness seems too fickle to be relied on. Better to abandon it altogether. Better to try to live in the black emptiness of outer space.

Attempts at denial also always fail, when the pattern of meaningness becomes obvious. No matter how far you are from a planet, the sky is spangled by pinpoint lights of distant stars.

Again, in the nihilism chapter, we’ll investigate common responses to failures of denial. These include defiant rage, intellectualization, and depression.

Fixation and denial are both rejections of nebulosity; and in a sense they are the same rejection. Each fixation is also a denial, and vice versa. Each fixation denies the opposite of what it fixates.