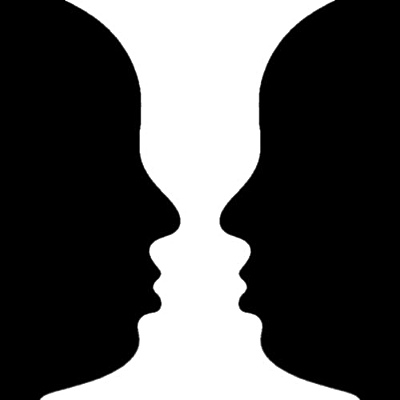 One vase? Or two faces?

The essence of this book is a method for resolving opposing pairs of confusions about meaningness. I would like to call these resolutions “non-dual.” Unfortunately, that word is taken to mean something else.

This book’s method draws on the Buddhist analysis of eternalism and nihilism. Buddhism often describes the resolution of this opposition as “non-duality.”

A quick Google search shows that, in current English, “non-duality” is almost always used to mean something different. Mostly, “non-dual” refers to monism: the doctrine that All is One, and all distinctions are ultimately illusory.

Monism forms a false opposition with dualism: the doctrine that subjects and objects are definitely, objectively separated. In this book, I argue that monism is wrong, and that the main reason people adopt it is because it appears that dualism is the only alternative.

Potentially there may be many different alternatives to dualism, of which monism is only one. (This book advocates another.) It would be useful if all such alternatives could be described as “non-dualistic.” It is probably too late for that; “non-dual” is well-established as meaning “monist.”

“Non-dual” appears to have entered the English language as a direct translation of the Sanskrit word advaita,1 as used in Hindu philosophy. Hindu advaita is monist; it asserts that all beings are One with the Supreme Cosmic Spirit.

Buddhist “non-duality,” and the stances I advocate in this book, are not monist; they reject both twoness and oneness.2 Individuals cannot be objectively separated, but neither are they identical (with each other, or with some sort of Cosmic Something). These stances are “non-dualist/non-monist.”

There has been considerable confusion on this point. The Buddhist view is often misunderstood as monist in the West. Often the Buddhist and Hindu “non-dualities” are mixed up. Using “non-duality” to mean “monism” has probably contributed to this confusion.3