Illuminatus!, Voegelin, and the politics of SBNR monism 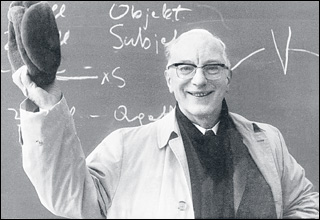 I’ve just discovered Eric Voegelin by clicking through to him from the wiki’s Illuminatus! article.

I read Illuminatus! in 1978, and it had a lasting psychoactive effect on me. I was reading its wiki page just now because I keep hearing references to the book by people who weren’t born yet then. Illuminatus! is indescribable, but the wiki describes it as

a satirical, postmodern, science fiction-influenced adventure story; a drug-, sex-, and magic-laden trek through a number of conspiracy theories, both historical and imaginary

The book was written around 1970, and was dismissed as amateurish junk by science fiction readers when it was finally published in 1975. It should have immediately disappeared forever, but apparently it’s going strong four decades later. 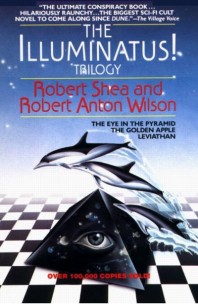 Perhaps its prescient postmodernism is why it has aged well? Postmodernism wasn’t yet really a thing in 1975.1 Illuminatus! is more a forerunner; and it has more of the disjointedness of an acid trip, or paranoid-schizophrenic hallucinations, than the elegant re-order of Serious Postmodern Fiction. Serious Fiction is mostly fashionable rubbish, and seems quaint after a decade or two.

So, Eric Voegelin. (This blog post is going to have a point; just you wait and see!)

If Illuminatus! is about anything, it is about immanentizing the eschaton. Today I learned that this preposterous phrase was Voegelin’s. He was a conservative Catholic political philosopher I’d never heard of. His work is unexpectedly interesting, and directly relevant to my current work in Meaningness.

The eschaton is the supposed end-state of history, when everything will finally be peachy keen. “Immanent” contrasts with “transcendent”; in theology, it means “inside the universe,” whereas “transcendent” is outside. For a Catholic, the eschaton should be brought about by God, in the World To Come, after He destroys the universe. For mere mortals to attempt to immanentize the eschaton—to bring about heaven on earth—usurps God’s role, which is extremely naughty.

The bad guys in Illuminatus! do just that. The first thing I realized on reading Voegelin’s wiki article is that much of Illuminatus! is a parody of his work specifically. In 1978, it was obvious that it satirized paranoid right-wing political theories in general, but I would not have guessed even yesterday that its authors had such a specific target.

The second thing I realized is that Voegelin must be a significant figure in the intellectual lineage leading to Neo-Reaction, a WTF political movement I recently started hearing mysterious rumors about on Twitter.

So far, this is just a bunch of odd connections, of the sort often produced by frenzied Wikipedia abuse. But this got really interesting when I discovered that Voegelin’s main conclusion—which sounds wacky in his jargon—is one I came to independently three years ago.

In my jargon, Voegelin’s obsession was the political consequences of monism. Monism is the idea that All Is One. Thus, your true self is really The Entire Universe, and also God. You can realize this through mystical illumination—hence the title of the novel.

Voegelin called this “Gnosticism,” which he defined as:

I started to understand what a disastrous mistake monism/Gnosticism is when I read David L. McMahan’s The Making of Buddhist Modernism, on an apparently unrelated topic. I gradually realized that monism accounts for much of what is wrong with current Western thought—and, like Voegelin half a century earlier, I’ve become obsessed with this. (My interest is not mainly political, though.)

McMahan’s book led me to the German Romantic Idealists, a group of philosophers I wrote about in “Bad Ideas from Dead Germans.” I then traced the monist ideas through history and across cultures. Some other villains are the Greek philosopher Parmenides, his grand-disciple Plato, the Neo-Platonist Plotinus, Advaita Hinduism, Chinese Tathagatagarbha Buddhism, and New Zen.

I noticed a pattern: in almost every case, monist spiritual ideas allied with young totalitarian secular state regimes, typically against a powerfully entrenched dualist priesthood. I developed a theory of how and why this happens, which I will probably eventually detail in Meaningness.

It turns out, though, that Voegelin mostly beat me to it. He was preoccupied with understanding how and why Nazism and Communism came to power and caused such catastrophes in the mid–20th century. He noticed just the same pattern I did.

Voegelin classed both Nazism and Communism as “Gnostic” movements that attempted to immanentize the eschaton. That is, they were founded on magical insights into Reality, and tried to end alienation by bringing about a practical utopia. He traced both back first to the German Romantic Idealists whom McMahan alerted me to. (It’s not a coincidence that in Illuminatus! the eschaton is immanentized by undead Germans—although this connection was certainly not in my mind as I wrote “Bad Ideas.”)

Voegelin devoted his career to tracing monist/“Gnostic” ideas through history, which will probably save me spending much more time researching that. (Since I am far from being a Catholic conservative, I’ll probably disagree with him about some implications.)

All this may still be nothing more than a collection of odd historical coincidences. However, given an apparently strong pattern, one might be concerned—or one might be an apophenic paranoid.

Current “Spiritual But Not Religious” (SBNR) monism traces directly to the German Idealists, plus indirectly through multiple paths, and directly and indirectly also to Advaita and New Zen. It probably has all the same totalitarian political potential. (After all, modern Zen was invented explicitly, openly, and specifically as ideological support for Japanese fascism! I wrote about that in “Zen vs. the U.S. Navy.”)

Fortunately, it seems unlikely that any country will make it the state religion. Or, at least, that would be my judgement.