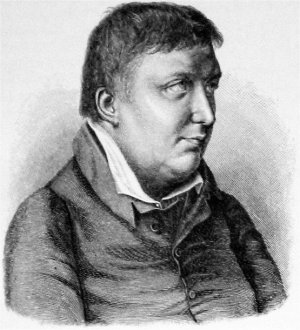 Twenty years ago, if you said that German Romantic Idealism would be the basis for a massive spiritual movement in America, most people would have said: “Wha?”

But the few who knew about German Romantic Idealism would have laughed at you.

It was a philosophical movement. It dominated university philosophy departments in the Nineteenth Century; but by the early Twentieth it was obsolete. In 1990, it was long dead, buried, rotten, and forgotten. The wind and rain had faded the letters on its tombstone to illegibility.

And then corpse rose; and went forth to eat the brains of the unprepared.

Who now remembers the names of Hegel, Schlegel, Schleiermacher, Schelling, or Fichte? Perhaps you have heard of Hegel—but probably only for his influence on Marx. (Marx as in “a spectre haunting Europe,” not cigars.) I, for one, knew nothing of the others before a year ago.

Why does it matter that their philosophy is the historical basis for current pop spirituality? Why am I making fun of them?

These ideas can only be fashionable now because, origins forgotten, they seem new and youthful and hip. Or else they’re supposed to be Ancient Wisdom From The East. (Tibet, probably. Or maybe Zen.) I would just like to say:

Yeah, yeah, “everything is connected”—all that stuff that went out around when gramps was born, you know. Some stuffy old German professors invented it, and it’s so last century. And you wouldn’t believe the things they wore! And their haircuts—Oh. My. God.

This might not be the world’s most rigorous philosophical argument; but pop spirituality is not popular on account of reason or evidence. People buy into it, without thinking, because it’s superficially attractive. I want to tarnish the glamor.

Tibet is sexy; Germany isn’t. If people knew they were parroting Friedrich von Schelling, they might think twice. Or once, having never thought before to ask:

Wait a minute—is my backache really connected with the price of eggs in China? How is it connected? How do you know? Why should I care?

In fact, the more people know about the inventors, the less good these ideas will look. Their politics were appalling, for one thing, and that wasn’t an accident. (I’ll write more about that soon.)

A more serious reason to look at this history is that Romantic Idealism didn’t just die of old age. It was slaughtered. In fact, it was killed three times over. Nietzsche executed it in the German-speaking world. It had also taken up residence in the English-speaking world; but in England it was snuffed by Bertrand Russell and the other founders of the analytic tradition. In America, the death-blow was landed by William James and the other founders of the Pragmatic tradition.

The weapons these philosophers used against Romantic Idealism were swift and sharp. Those of us faced with the task of laying the same shambling, rotten ideas to rest once more could take up the same arms.

It must be said that the new philosophical traditions founded by the exterminators are now also dying. In fact, it became clear that their illnesses were terminal just around the time the Romantic Idealist ideas started to make a comeback. I think that is probably a coincidence.

Still, both the post-modern tradition that descends from Nietzsche, and the scientific-rationalist tradition of the English-speaking world, are widely seen as nihilistic and discredited. That means that the battle against undead brain-eating ideas needs new strategies as well.