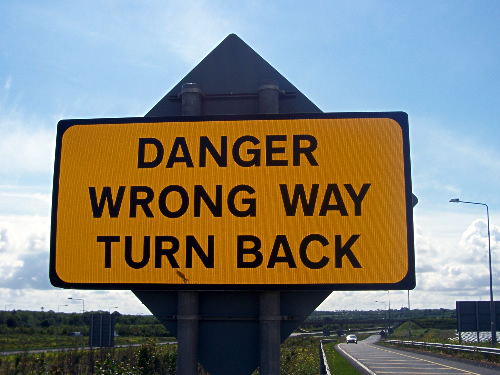 Wrong-way reduction is a logical fallacy no one seems to have pointed out before.1 Regular people rarely make this error on their own. It’s common for philosophers, cognitive scientists, and theologians. The wrong-way reductions made by these professionals escape into the general culture, and cause trouble for everyone else.

This is particularly common and obvious in rationalist eternalism. I will explore several examples in following pages, including logicism, Bayesianism, and utilitarianism.

An informal example: Suppose you want to get from your home in rural California to Athens, Georgia. There are many ways you could do that, some harder than others. Most of this problem can be solved by taking an airplane from San Francisco to Atlanta. This leaves only the easier problems of getting to and from the airports. What’s “reduced” here is the difficulty of the journey.

A wrong-way reduction transforms an easier problem into a harder one.

An example: Suppose you want to predict the outcome of a sportsball game. One approach would be to try to predict the number of goals that will be scored by each team. Then you could simply compare the two numbers to see which is greater.

This reduction goes the wrong way, because it is much easier to predict who will win the game than to predict exact scores.

Why would anyone make this sort of mistake?

If you wrongly believe that the second problem is easier than the first, this is not a logical fallacy. It’s an honest error of fact.

Wrong-way reductions are usually motivated by eternalism, the denial of nebulosity. Eternalists are unwilling to accept the inherent messiness, ambiguity, and uncertainty of life. Eternalists try to turn messy, ambiguous, and uncertain (but workable) problems into tidy, clear, certain ones—even when those are entirely insoluble.

Here’s an example. Divine command ethics turns the difficult problem of choosing how to act into the impossible problem of knowing God’s will. Ethics gets messy when different ethical considerations point in different directions in a single situation. Then it may appear that God has given contradictory instructions. How then to resolve the ambiguity? Honest theologians admit—when pushed hard enough—that it may be impossible to know what God wants then.

To cope with the cognitive dissonance of relying on the impossible to cope with the merely difficult, eternalists produce evasions, obfuscations, and denials. These boil down to an “if”: if we knew what God wanted, then that would be a simple, infallible guide to correct action. The fact that we don’t know gets passed over quickly, hoping you won’t notice.

This example is slightly contrived, mainly because divine command ethics has so many other defects that knowing God’s will gets barely mentioned in discussions of this ethical approach. I chose it because it’s so simple and so obviously unworkable.

The next several pages explore more sophisticated, non-theistic examples of the same pattern.